In the team Quantum Physics in Circuit, we explore quantum phenomena in nano-scale electronic circuits, from correlated electronic matter to quantum transport across elementary conduction channels. 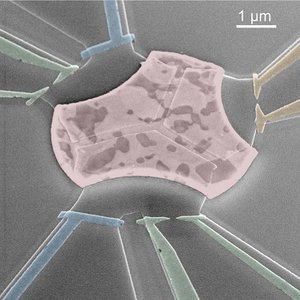 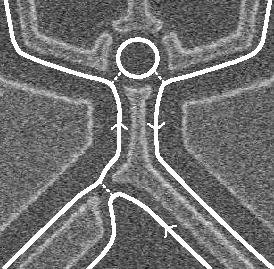 Heat as an object of study and as an investigation tool.

QPC is part of the PHYNANO regroupment, see members here.

December 16, 2019: Congratulations Emile for this great PhD defense and for the mastery shown in your answers to the questions!

December 2019: And now it is our investigation of the electronic heat flow and thermal shot noise in quantum circuits that is being published, a few days later, in Nature Communications !

December 2019:  Our new paper on the non-local quantum transmission of the electrons' state has been published in Science!

May 2019:  Our paper demonstrating a 0.25 mm electron coherence length in a solid-state circuit is now published in Phys. Rev. X. (C2N news)

April 2019:  Hadrien Duprez obtained one of the two awards for best oral presentation at the C2N PhD days. Congratulations Hadrien for this pedagogical tour de force!

September 2018:  The new paper on the circuit quantum simulation of a Tomonaga-Luttinger liquid appeared in Phys. Rev. X and was highlighted by a Viewpoint in Physics. (C2N news)

August 2018: Zubair's PhD, nominated as an outstanding thesis by Paris-Sud university, was published as a book by Springer.

June 2018: The Science 'Research Article' (long format) on quantum criticality and superballistic transport is now published in its final printed form (also available on arXiv) and has been selected for a CNRS news (French).

May 2018: The paper exploring quantum criticality and superballistic transport with a circuit was put forward in the selective First Release program of Science!

February 2018: The paper on the Coulomb blockade of heat is now published in Nature Physics, and put forward on the cover page.